Kovalam is the center of ayurvedic massage, medicine and treatments in whole of Kerala. People come her for 1-2-3 week stays. They get treated for all kinds of diseases or they go here to just get better in general. We arrived here after an almost five hour train ride and then the last 20 km i two cars.

The train was actually a great experience. We had bought the luxury tickets on first class with aircondition (500 rupees, slightly less then 7 euros).

Traveling by train seems like a great way to travel in India. Although the train wasn’t in any way luxury or fancy. We sat on benches in a coupe with an Indian guy who played music from his phone during the most of the ride and a father and daughter travelling together. Marie and Ulrich chatted with them for several hours. Two men was walking up and down the aisle selling foods, thai and coffee. We had a great ride.

We’ve arrived to our new destination, the Beach Hotel II, which is nice, overlooking the Kovalam Lighthouse Beach from the south. But it’s also very different from anything else we’ve seen in India.

This place could be Greece, Spain or Italy. It’s suddenly not obvious that we’re in India. This is more like Tourist Anywhere. Even the prices in the restaurant menu changed to European level. Neither water nor WiFi is complementary. Well all guests here are Europeans so I guess it makes sense.

The Lighthouse beach lies in a small bay that’s probably less than 500 meters across. A paved walk runs along the bay with the beach on one site and small shops and restaurants on the other. The shops are selling the usual souvenir goods; beach mattresses, bracelets, sunshades, water, ice creams and then there’s all the seaside restaurants in between. Every shop and restaurant has at least one person on the walk in front of the business, sometimes even two or three.

…that was 20 meters so 500 meters can feel long before you get there.

People here aren’t as friendly as we’ve gotten used to. They are basically just hustling.

Some of them even have signs on the shop front saying “hassle free shop”, while nevertheless you’re being hassled.

As we’ve reached the end of the bay an new one at the exact same size reveals itself only separated by an old lighthouse. This is Hawa beach and this place is completely packed with people. All are local Indians and all of them are fully clothed. Most of them have stepped into the water at about waist depth.

They are playing in the large waves as they break - fully clothed, men and women alike; jeans, shirts, dresses, saris, scarfs.

A small guy in blue shorts and shirts, runs around on the beach and waves a red flag and blow his whistle everytime someone gets in deeper than the waist. After a while his waving and whistling goes completely crazy and he starts pointing to an imaginary wristwatch. The interpretation is universal “It’s time to get up”. In matter of few minutes the guy has singlehandedly pulled 300 people out of the water.

We’re thinking sharks. We’ve seen the same eager type of beach guard in Cocoa Beach pull people out when sharks were spotted. But then again, as far as we know, there aren’t any sharks in these waters. We simply go and ask the guy whats happening. His english is sufficient to explain that the undertow is strong so Indians can not go deeper in than the waist - since they can’s swim. And the last stunt was just because it’s six o-clock. The beach closes at six.

Based on the fact that these people can’t swim I understand why the beach guard was so eager with his whistle. Some of the waves here are 1.5 meters high as they break and still hundreds of Indians are running like lemmings that can’t swim into the water, only stopping when they hear the whistle.

Makes me wonder what the statistics for drowning accidents are on this Hawa beach.

I’ve been eating painkillers for 3 days now, hoping that my aching throat will eventually heal.

At noon I fell OK to take a short walk, I go to see the view from the lighthouse, I see a huge moske across another bay that lies towards south. I start walking towards it through small paths that follows the steep cliffs. I come to a street and sees that it leads straight to the huge pale green mosk, As I reach it I see across another bay that there are hundreds of people on the beach in the distance and there are hundreds and hundreds of boats both in the water and on the beach.

A city, a harbour and a market et seems like. 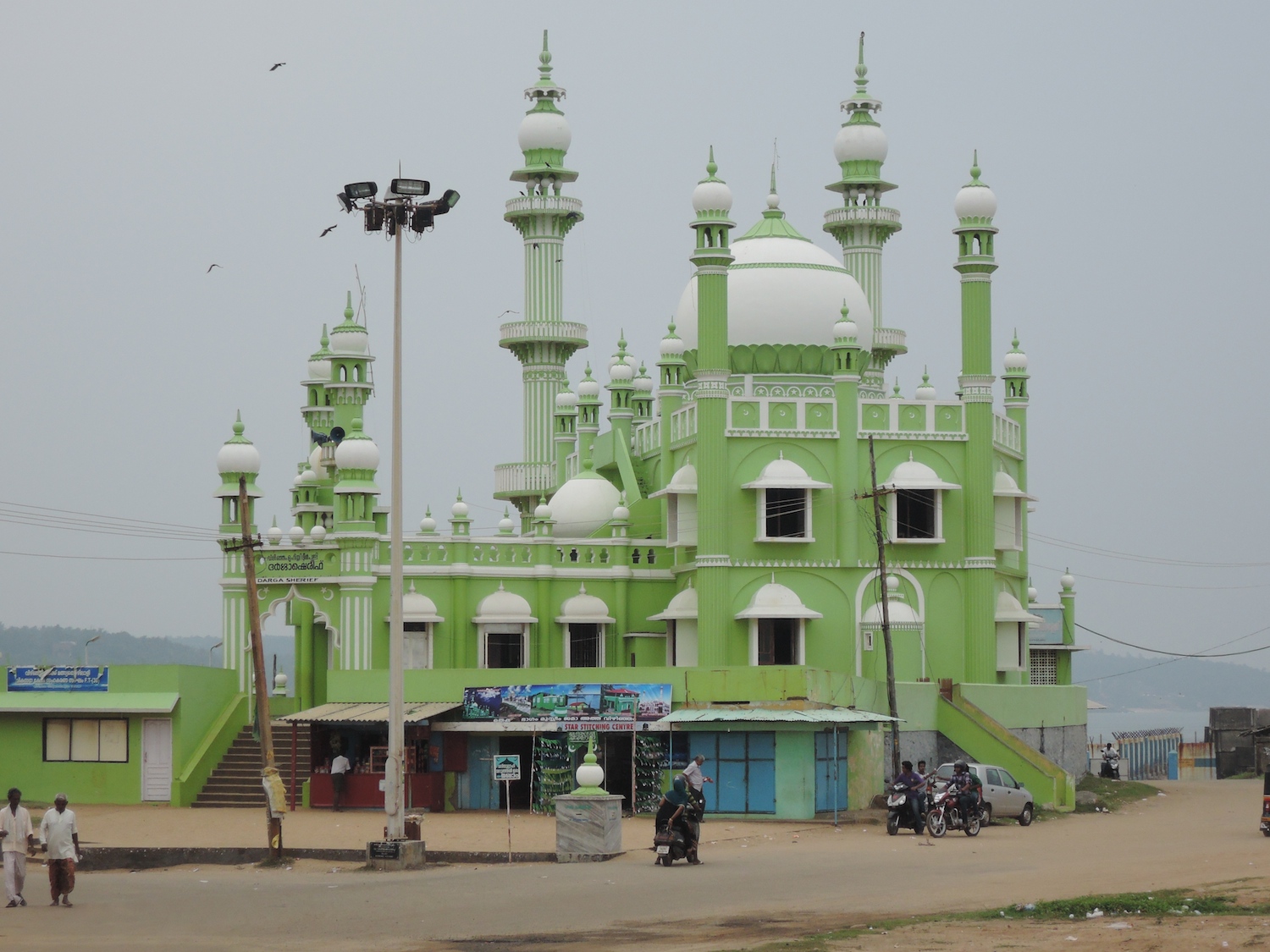 The road goes on behind the mosk I walk towards it some 50 meters. Then the atmosphere suddenly changes dramatically. People aren’t smiling an saying “hello” any more, they are basically ignoring me.

This is a very poor area, completely different form the tourist anywhere atmosphere I left at the lighthouse beach. I bet thees people don’t deal much with tourists. I walk to the fish market on a beaches with fishing boats pulled up to it. Between the boats are smelly excrements - from humans it appears a few moments later - as I surprise three men sitting in squat position with their loincloth pulled high upon their backs and everything else dangling out from underneath. They are chatting with each others, the see me, but the completely ignore me.

OK, so in the slum areas the beach is the toilet. At this point I’m probably 1 and a half kilometer off from tourist anywhere. 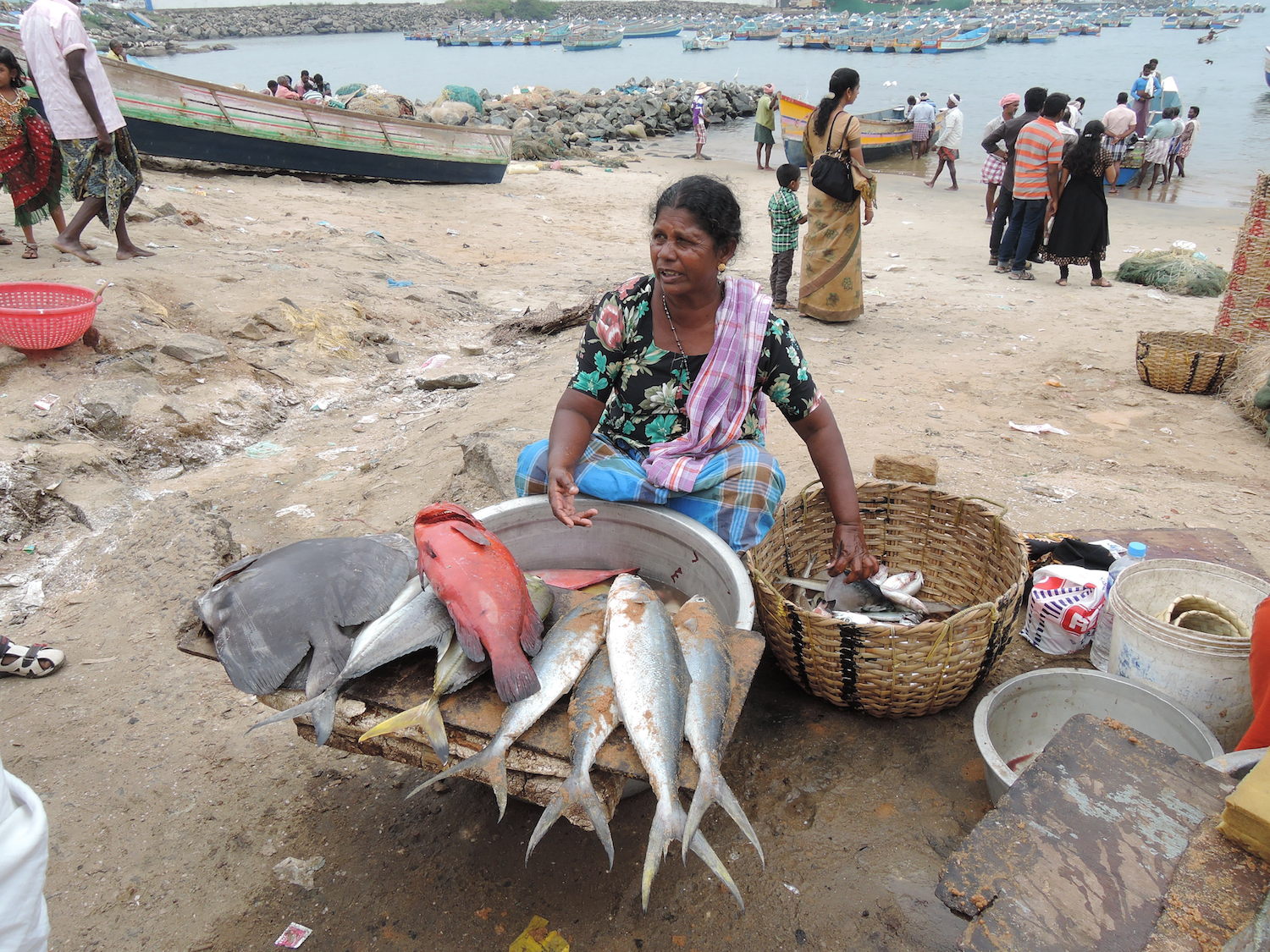 I continue through more narrow paths, where people live and work. I’m headed to the fish market. When I arrive it appears that it’s a quite hectic city, and it seems large. Later, when I’m back online I learned that the city is Vizhinjam. At the fishmarket I’m catching eye contact with a woman sitting with a basket of fish in front of her.

She turns her head into the crowd on the beach and shouts something, maybe to her her husbond or her brother or her cousins. Well probably she shouts to all of them, because a few seconds later I’m surrounded by four guys who are trying to sell me fish from the woman’s basket. 900 rupees for a 3 kilo beautiful redfish. I’m telling them that “I don’t have anywhere to store the fish, I’m staying at a hotel”. 700 rupees? “I don’t need a fish” I’m trying to explain. 500 rupees?

I sense I’ll better be off. The then woman points at my small camera, I though I had it hidden in my hand. “Picture, picture”. OK, let’s settle this - I’ll take a picture.

Now she wants money, and her husbond, uncle, cousin and brother also want’s her to have money. I fumble to find 10 rupees in my pocket and hand them to her, she’s not content. I’m out of here. I turn on my heels and walk away towards the city away from the fishmarket. Thinking that it might not work like that, maybe her relatives will insist that a photo is worth more then 10 rupees. Nobody follows me.

I’m headed back to tourist anywhere I guess.

A guy comes up to me and walks besides me, he is friendly. He probably saw the fish incidence, his name is John, he lives here, he tells that his family has been fishermen in this village for 11 generations. That pretty much equals forever. He suggests that I take a tuk tuk a little further south to see a very spectacular church they have there and then have the same tuk tuk drive me back to Lighthouse beach. The tuk tuk drive doesn’t speak English but John explains it to him.

The church is truly spectacular and there’s a crowd of women blocking the entrance. They move aside and make a path for me as I approach them, I drop my sandals and go inside. The alter is huge like the screen in a cinema. As I walk out of the church, all the women are coming in - behind six men carrying a small cuffing on their sdhoulders. I’m at a funeral! I step aside and make my self very small, I feel like an intruder. But nobody sees me.

My tuk tuk drive explains that it’s an eight year old boy they are burying. He drives me back to my hotel by the same path that I walked here myself. I would have sworn that a tuk tuk wouldn’t fit on this path.

Open your eyes and you’ll learn.