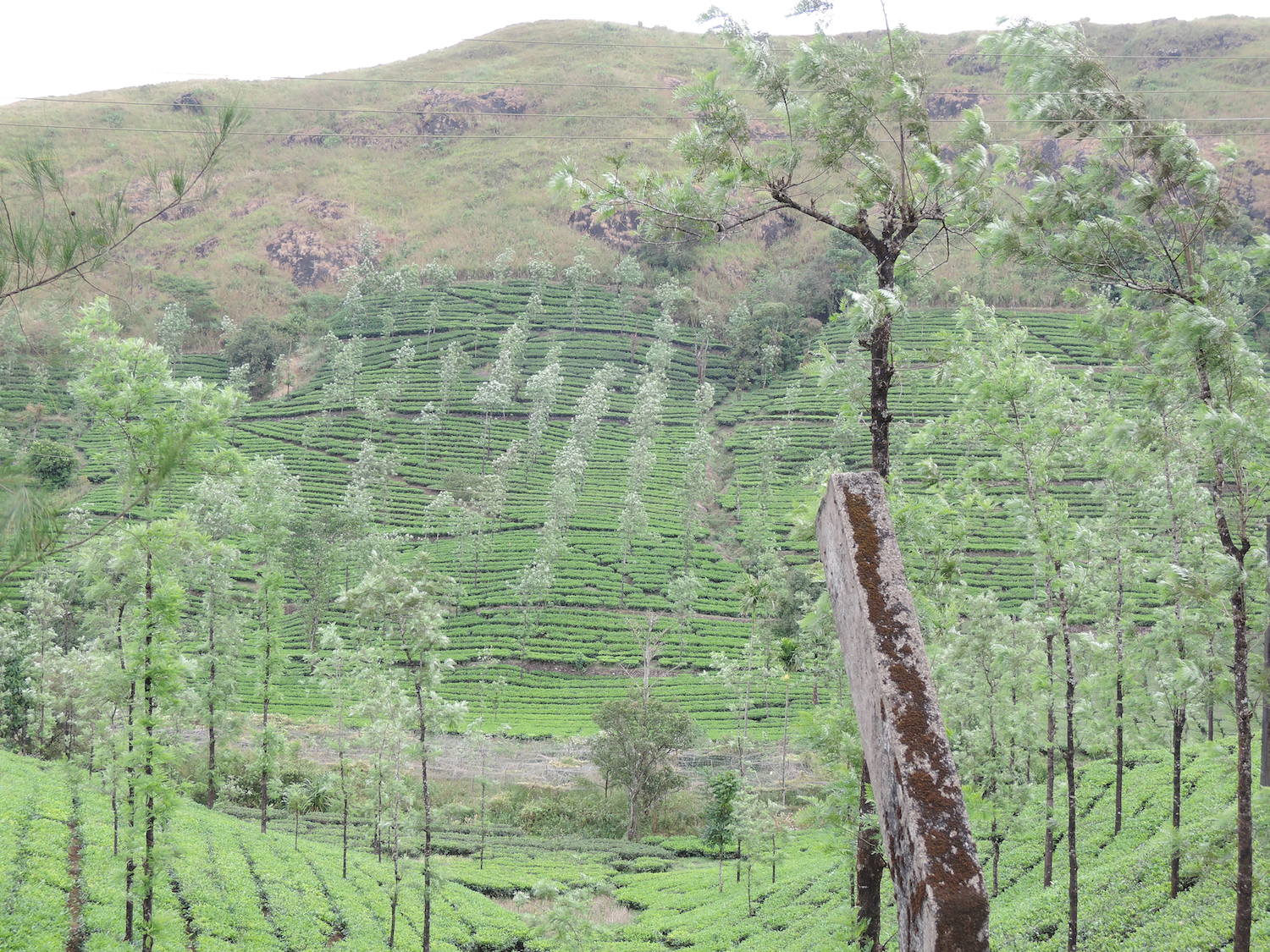 The day we went to the nature walk with the two drivers and Richard and Patricia our driver incepted an idea in our heads by suggesting that we should go to Moonar to see the mountains and the tea plantations. It wasn’t in our original itinerary but we all seemed keen on the idea. It turns out that it’s a three hour ride to Moonar and none of us really feel comfortable with spending 6 hous of a day in a car in the Indian traffic.

Sinta suggest that we could go to Vagamon instead it a different mountain closer by but not as high and not as well known. We had a family pow wow about this topic yesterday and we decided not to go. We’ll do it next time we’re here.

Jose approached us later and kind of insisted on us going there; “It’s a beautiful scenery, you will not regret it”. In fact he wanted us to go so badly that he offered to pay for the driver to take us there. Of course we wouldn’t acceppt that but on the other hand we were finally convinced by the way Sinta and Jose insisted that we should go. So this morning we’re off to Vagamon. 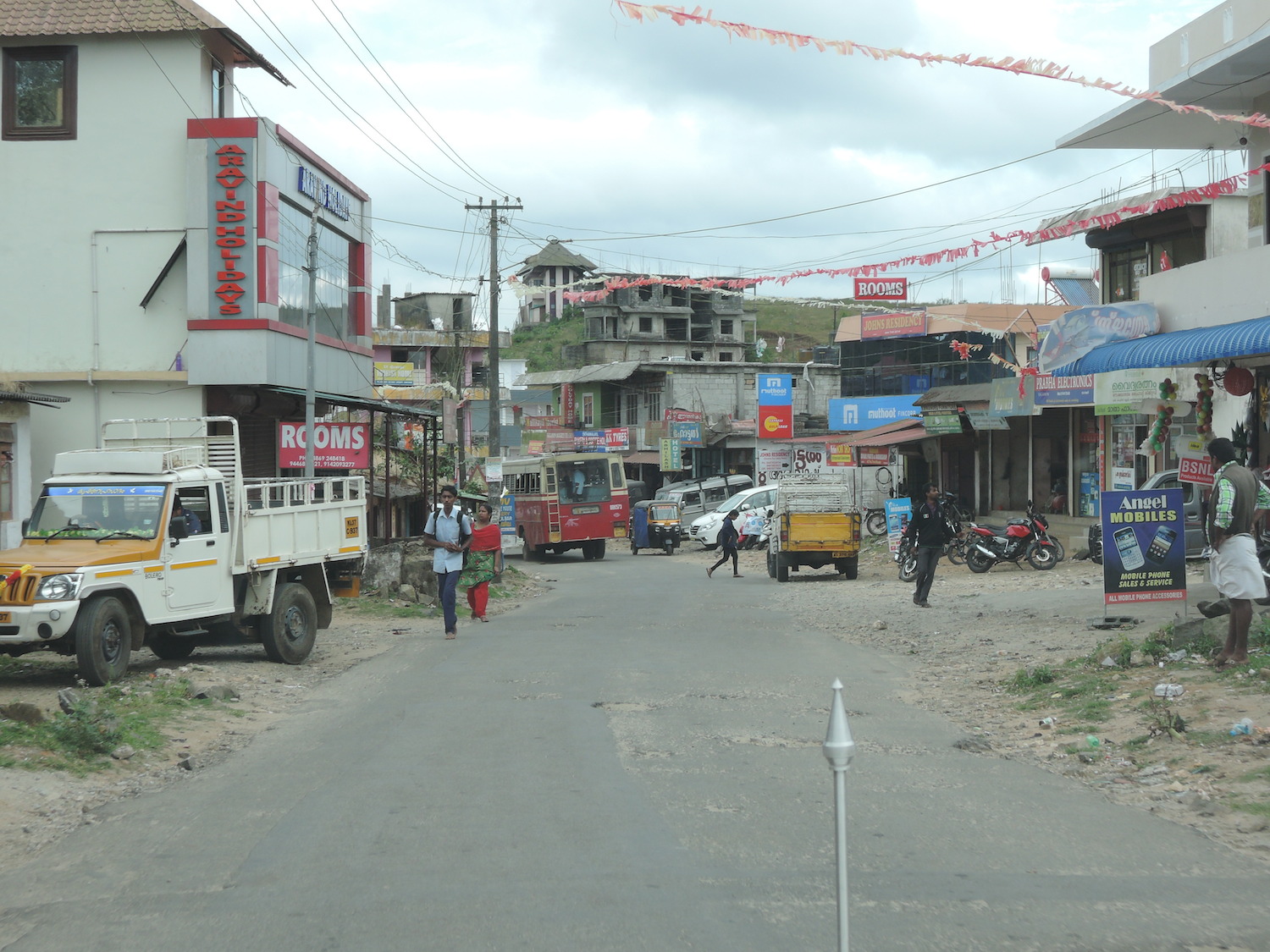 Our driver Siby turns out to be quite skilled, and this ride doesn’t seem the slightest bit unsafe. He has prepared a huge basket of candy and fruit for us, well mostly for Niels, he eats about 3 quarters of it all by himself. The Mountains are like a plateau. Once we’re up there the mountains turn into a high altitude hilly scenery with tea plantations. It truly is scenic.

Vagamon , the village, is a long stretched road with shops and houses along the side and behind these houses nothing but bushes and rocks. It resembles a town from a western movie, I could easily picture Lee Van Cliff or Clint Eastwood come riding in here on a high horse shooting a few locals before entering the salon.

An extra day - to relax

Dewalokam was something that we’d all been looking forward to as a relaxation from our rushed everyday life back home, and now we’re about to reach the end of our stay here. Tomorrow we’ll be continuing on to the backwaters.

As we left this morning Sinta approached Heidi and asked if we had looked at our booking, because she had us down for five nights, which would mean that we shouldn’t leave before Saturday. She sais this as we are already seated in the minibus about to leave, so we didn’t check it immediately. But by common effort we managed to reconstruct the itinerary by memory and came to the same conclusion that we had simply slipped a day - five nights separates six days and we simply got it wrong.

It means that we would actually still have a whole day tomorrow at Dewalokam were we would have absolutely noting on the program - except yoga. And a little later Heidi and Marie also managed to sneak in a full ayurvedic body massage that Sinta had arranged for some of the other guests, which she offered us to join.

In the hills we eat at a restaurant which Siby our driver knows, it’s part of a turist resort. The dining room looks like something that could be taken our of an east German scenery from before the reunion; cracks in the walls, absolutely no decorations on the walls, cracked tiles on the floor, spots from water damages in the ceiling, a very small TV at the end of the wall - 20 meters away - playing a Bollywood movie which appears to be a western/karate/comic combination - which truly sounds odd, but it think it’s a pretty standard theme in Indian movies.

Sinta and José warned us that when we’re eating out, especially in the mountains, we should only order vegetarian food. No fish and no meat. The food we order is actually delicious and the staff is very pleasant, so never mind the lack of decoration. 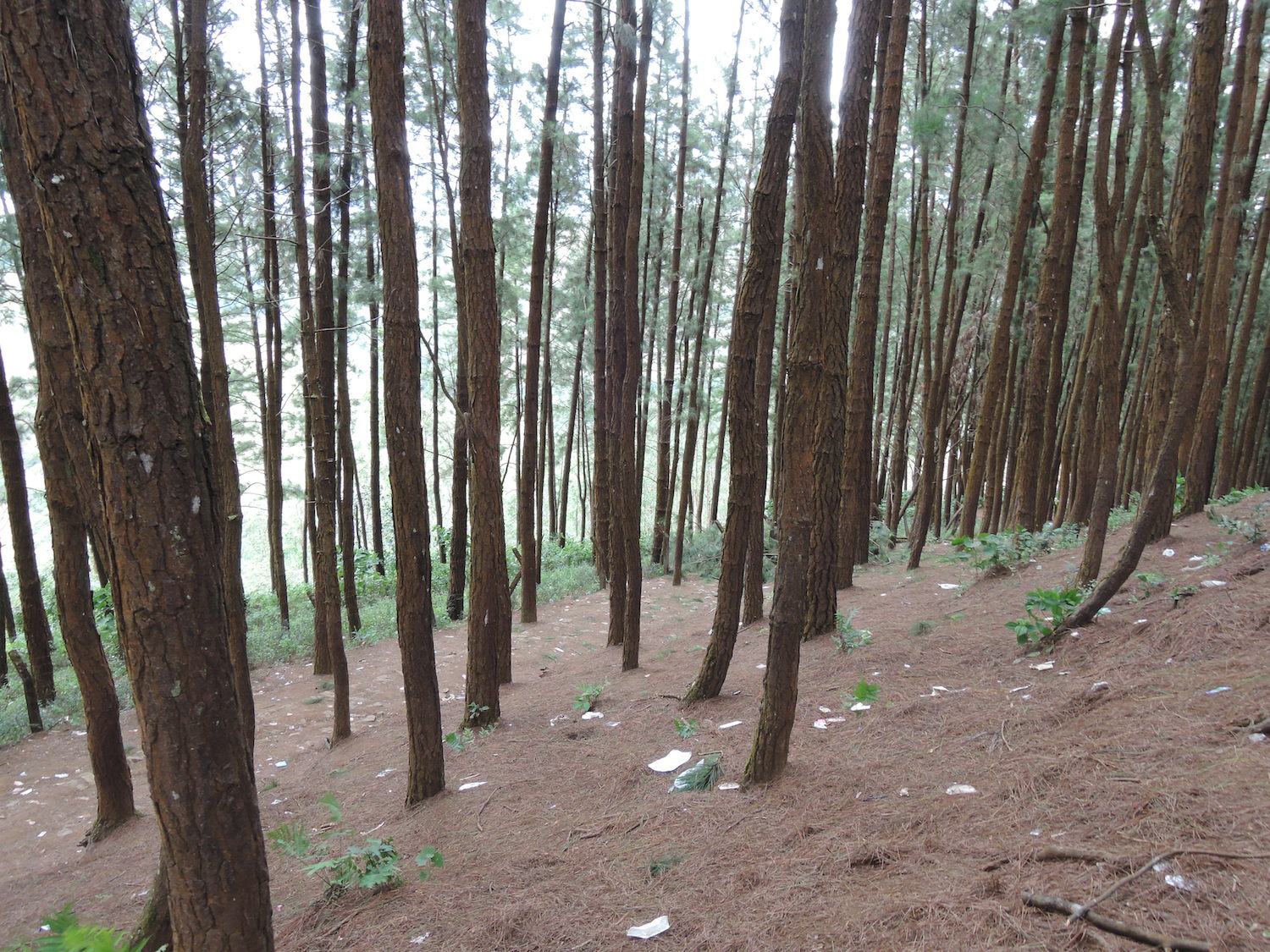 After the lunch Siby has arranged that we shall go and see a tea factory, but it’s not open until 2 o’clock so he invites us to take a walk in the famous nearby pine woods. It’s an area where a lot of people come and have their photographs takens, especially newly weds come here and shoot portraits and videos in the days after the wedding.

The pines are tall and stand close, the wood is actually spectacular, except from the fact that there is litter everywhere. The forest is indeed full of couples families and friends having their pictures taken, but it must be hard to find a spot where the background isn’t multicoloured by plastic waste.

At some point we stand on the edge of a steep slope and we have a newly wed couple some 50 meters higher up that are being shot by a photographer who, judged by his equipment, is clearly a professional. The bride comes towards us and waves her hand. Obviously we’re in the way so we’re pulling to the side. Siby explains to us that she actually want us to pose together with them in their wedding pictures.

How cool is that?

The photographer is indeed a pro, he shoots commercials for the Philips corporation and he has been filming and documenting the entire wedding, including the preparations. Now they are wrapping up the wedding-documentary with a few last shots in the famous pine wood and then he’s going home the do a post-production of a calendar, an album and a 10 minute video that can go out to all the wedding guests.

The photographer shoots and shoots, at some point his two assistants drops their equipment too and joins us as well.

Siby gets a call that the visit he arranged at the tea factory is off. The factory had to shut down early. Instead he managed to arrange a visit at the dairy of an ashram close by but when we reach the gates of the asram property they are closed and a guard stands next to a sign saying that unfortunately the asaram is closed for visitors due to serious outbreak of foot and mouth cows decease.

Aargh, what a pity, we would really like to visit an asram. Siby gets out of the car to talk to the guard, we can’t hear what he says but the guard shakes his hear - looks like we’re not getting in. Then we see Siby hand him a money bill, I don’t know it it’s a bribe or a tip, but anyhow the guard opens the gate. 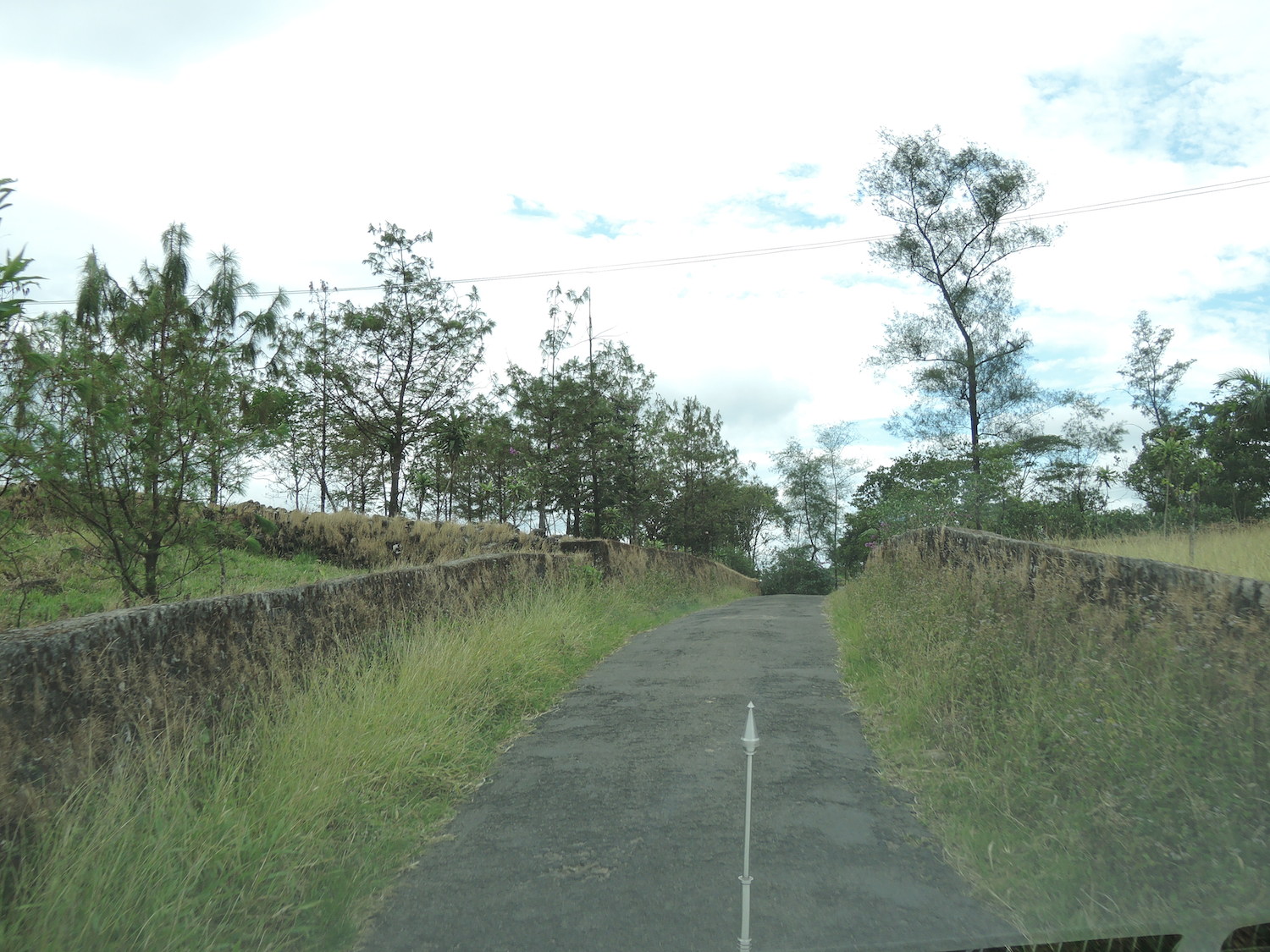 The scenery of the small narrow roads up to the asram reminds me of Scotland. The road has stone fences at both sides and the landscape is hilly just covered in grass. When we get to the asram we all get out of the car. Siby talks to a priest that’s comes out af some administration building as we arrive. Aaargh - It didn’t work after all. You can not buy your way into a diary farm when there’s a cows disease outbreak in the area, I guess that’s kind of reassuring in a way - even though I’d really would have liked to see the asram.

We have to turn around again. On our way back down we see the guard coming up towards us walking in the side of the road.

I notice that Siby doesn’t salute him. 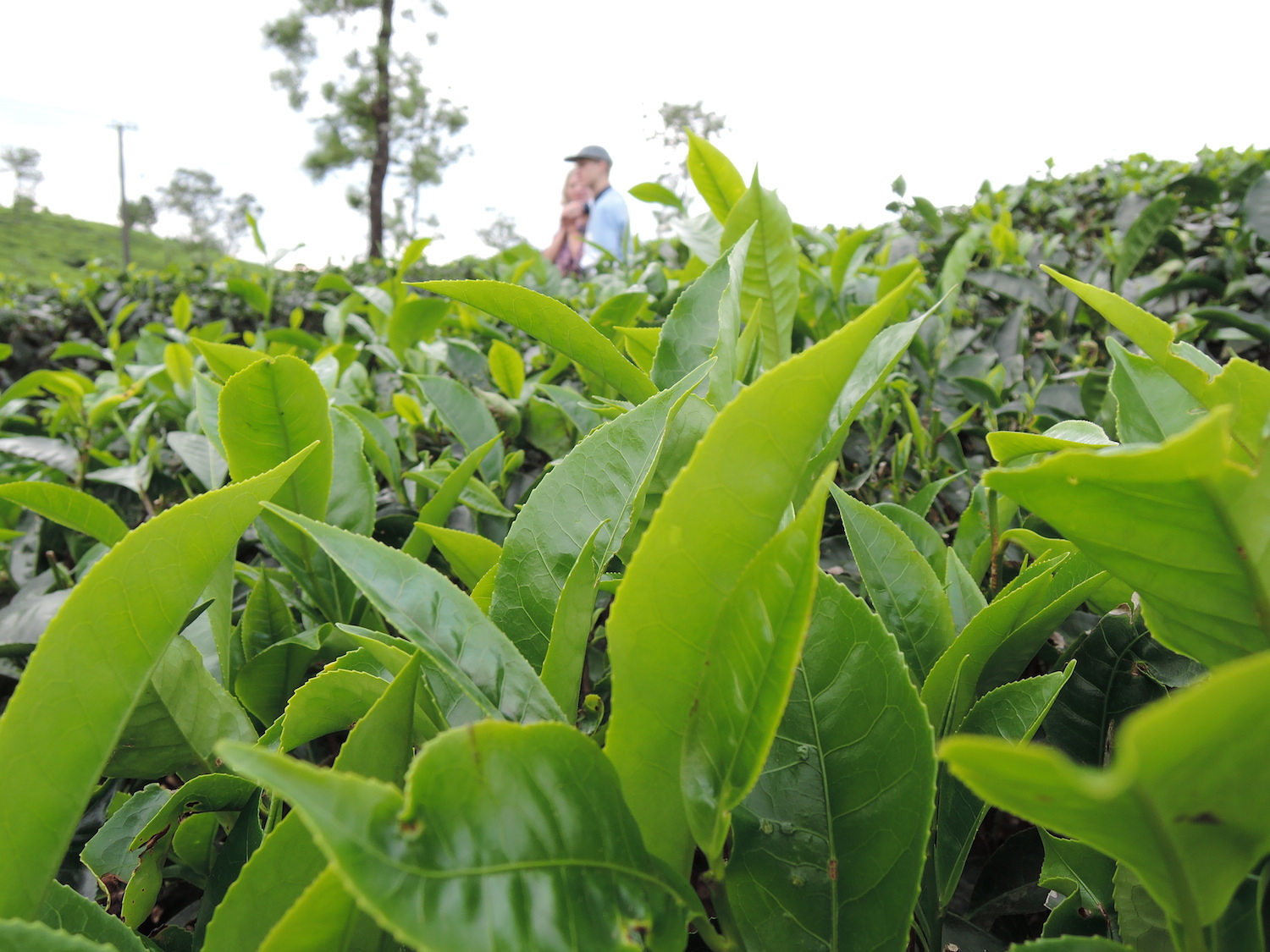 On our way back we stop at a tea factory outlet and we buy 1 and a half kilo of local Vagamon tea for 120 Rupees (less than 2 Euros). Interesting to taste it and see if it’s any good.

Siby stops at a tea field and we take a walk there instead. The tea leaves doesn’t smell or taste of anything. There is absolutely no resemblance to the distinct smell of tea as we know it. I wonder how anybody ever came up with the idea to dry and toast theses leaves and then pour hot wanter on them. It’s not obvious that it would turn out to be a success.

In the afternoon, after coming home again Niels and Ulrich went to play badminton in the gaden. The one meter tea afternoon socialisation in front of the dining room started as we got back so Heidi and I just hang out there. New guest had arrived; a couple form U.K. and another NZ/UK mixed couple and a family of six from [Ledah] in North India, also known as little tibet had arrived man and wife, their two grownup children and the grandparents.

Conversations continued non-stop onto pre-dinner drinks, during dinner and well beyond that as well.

Chewang, the father of the family from little Tibet, has a trekking company in Ladakh, with locations 2-3 other places in Northindia and a station in Nepal. They employ more then 50 people all year round and even more during high season. With three different stations they can move equipment from one place to the next and this way have tourist season all year.

It turns out he also arranges mountain-biking as well as trekking and that he even has the Lhasa-Everest basecamp-Katmandou route in his program. This is the route which we have been fabulating about back home in the local MTB-gang that we want to take in spring ‘16. Interesting how things can sometimes work out - we might try to get engaged to Chewang arrange our tour.

Kunzes, the daughter of the family is same age as Marie and studies at the university of New Delhi. She tells us that up there, women her age can’t walk alone in the streets at night due to assaults and rapes. Kerala seem so different. Down here muslims, catholics and Hindus seem to have found a fine balance with plenty of room for everyone and plenty of respect for each other.

Discussions goes on for hours after dinner and after that, card games.