I wonder if they will ever kill that music? It’s saxophone with a distinct Indian rhythm, like early 80’ies funk meets Harekrisna. I’m on a plane that just left Doha in Qatar where we flew to from Copenhagen. We’re headed to Cochin in India.

I didn’t sleep at all in the first stretch, so now I’m really tired and looking forward to a few hours of sleep. The stewardess greeted us with a “good morning” when we entered the plane, which is kind of odd, because it’s in the middle of the night. It’s almost half past one. The cabin light is still on and the cabin crew is serving us dinner;

“I have a choice of lamb and vegetarian spinach” says the stewardess. OK, I’m starving, so I’ll have a lamb dish for breakfast, sure.

Listen - the funky hare krisna saxophone stopped chanting. I empty a flight-size bottle of redwine and then I fall into sleep.

In Cochin we spend the most of an hour getting through customs, Ebola registration check posts and we need to have our bags scanned to get out of the airport through the metal detector. The scanner beeps red alert for every person who goes through it. But the one guy who’s operating the scanner doesn’t seem to notice.

Im thinking that one good thing about all these checks that are taking so long is that at least our bags will the be on the luggage belt when we get to the baggage claim area.

No. They are not.

Through the windows out to the airfield we can see the bags from our plane lying on luggage trucks, surrounded by lots of workers who aren’t the slightest bit busy. The bags are loaded onto the belt in a pace of about one bag per minute.

India is already showing us that procedures are different from what we know.

As soon as we left the airport all order and efficiency seemed to be restored. Our chauffer was waving a sign with our names on it and he had a colleague with him, so there were two cars for five people, plenty of room for our luggage and seat belts for everyone. We had been warned that traffic in India is hectic and rules does not apply the same way as we know from home.

Immediately when we got off the airport ground we got introduced to the hectic traffic as our car entered into the a roundabout, instead of holding back for the crossing traffic the driver just blew the horn and trusted that since his car was bigger than the tuk tuks, they’d probably hold back. And they did indeed.

The town seemed to be organised just along the road. A few hundred meters behind the buildings lying along the road we could catch sight of the forest. The road only had one lane in each direction but in reality it was organised more like a three-lane motorway with the slowest going vehicles longest to the left and the speeders longest to the right. Counting from left to right the order seemed to be tuk tuks, lorries and trucks, cars, motorcycles and on the outside all the speeders - regardless og size and shape.

Our drive was a speeder.

The traffic is so dense that all types a moving objects are going in each direction, all these obviously can’t fit into lust one single lane, so most of the time our car was in the opposite lane taking over lorries, busses and slow going cars. And since the traffic going the opposite direction behaved the exact same way, we could for obvious reasons not be in the in the opposite lane for more than a few seconds - at a time.

It was a 65 kilometer drive.

I wondered if it would make any sense trying to explain the driver that we weren’t in any kind of hurry, but when I turned to Heidi and Niels who were in the backseat to check if they were OK - they were both firm asleep. I gave in and fell asleep too.

I woke up due to the car bouncing and bumping. It appeared that we had entered rural area and the traffic was less intense here, and since a three-lane motorway wasn’t required anymore, the road had also reshaped into a narrow dirt road - with plenty of wholes.

Suddenly the car stopped in the road side and the chauffer got out as he mumbled “just a minute” - he then went a bought fish at a shop lying as the road took a sharp turn. It literally only took a minute. Marie and Ulrich was in the car in front of us, which didn’t wait while our driver was buying fish, so we clearly had to catch up.

The last two kilometers up to Dewalokam we drove through rubber and pineapple plantations. 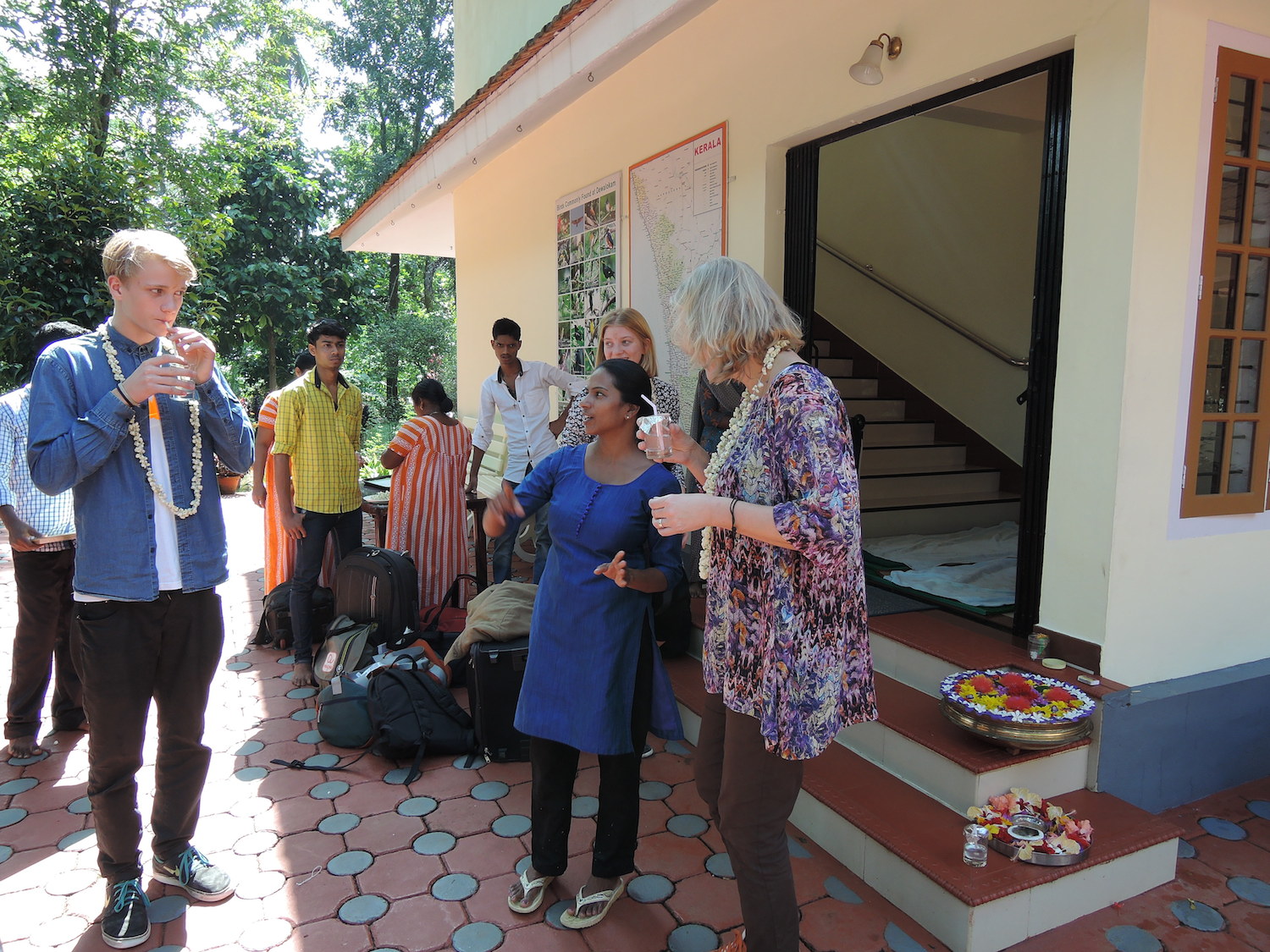 Dewalokam is a two-story yellow building with doors and windows in teak. The building is organised so that we arrive into a court yard. The first thing that catches my eye is five women dressed in similar orange dresses, then three young men, one of them carrying a tray with freshly made lemon and ginger lemonade.

Sinta, our hostess comes up to us even before we’re done unloading the car for bags signalling that we should leave that to the drivers and step aside, over to the orange women and the young men.

As we stand in a half circle Sinta explains about the traditional Indian greeting ceremony. She has lit a small flame burning in a fresh coconut. On the same tray as the burning coconut is a cup that contains a paste made of grinded sandle wood. She approaches Marie as the first. She first blows some of the smoke from the burning coconut to Marie’s face and then she set a mark of the sandlewood paste in her forehead.

Sinta continues round the half circle and does the same to all of us. Right after comes one of the orange women and hangs a string of small fresh white flowers around the neck of each of us and after her comes the young man with the lemonade and offers us a drink.

Never have I felt so welcome at a homestay before.

When we enter into the house we take of our shoes. We’re in a cortege lead by the orange women who are all eager to carry our bags and to read our faces and first impressions as we’re shown to two spacious rooms.

We were told that this place wasn’t a luxury stay, but it actually appeared just perfect. Fine architecture, tiles on the floor, teak windows and furnitures, flower decorations in the gangway and stairs.

As we get settled Heidi takes a look at the toilet and notices a bucket right next to it. She then wonders if the toilet paper can be flushed or need to go into the bucket. She grabs hold of one of the orange women to ask her - in the assumption that they speak english. It turns out that to communicate this question a slight bit of pointing at the bucket is required, so the orange woman follows Heidi to the toilet. Well actually everybody in the orange troop of women follows her to the toilet to inspect the issue.

It turns our that we can flush the toilet paper.

After arrival we all need to go to sleep. Lunch is at a quater past one so we can take almost an hour an half. We overslept.

Ulrich who wasn’t asleep wakes us up at half past one and we quickly rush to the dinner room - fifteen minutes late and not quite awake. The room is crowded. Some twenty people are sitting at a long table eating while engaged in conversations with each others. The five of us are offered a table for ourselves. The long table simply can not fit everyone.

In front of us is a huge banana leaf with a pile of rice in the middle and surrounding it are small piles of different cookings; Pineapple chutney, spicy coconut mix, yoghurt sauce, variants of banana and lots of other stuff, one of the young men comes and serves masala and dal over the rice.

Sinta instructs us that we’re supposed to eat with our fingers, not mixing stuff too much together but to take one of the flavours at a time and mix it with a nip of rice in each mouthful. My first food encounter with Indian cuisine is overwhelming. Maybe Sinta sees that as she reassures me that “normally we serve on plates and offer knives and forks” It turns out that this is today’s speciality. An Indian try-out meal.

At four o’clock all the guests are summoned again in front of the large dinner room for what Sinta calls “the one meter tea”. Three men has pulled a wagon built from four bicycle wheels and glass montres out in front of the building and a large kettle in the rear of the wagon boils water for the tea making. Two of the young men at the wagon comes around to everybody and takes individual orders and thai is made one glass at a time by the kettle master. He makes a tea in a glass, adds milk and sugar in a can and with the tea glass in one hand and the can in the other her pours the content from the glass into the can held a meter below. It’s literally one meter of tea.

Sinta tells us that after tea she will guide us on a garden walk on the organic farm of Dewalokam. Richard and Patricia, two guests from England who arrived just a few hours before us are also coming.

Sinta stops already after a few meters and points out the teak trees on one side of the road and the mahogany on the other. She has crosses a small bush fence and picks up a fruit from the ground. It’s a nutmeg.

She has a small herb knife in her hand and as the cut it open she explains that nutmeg is a strong medicin used to stop running stomach. She cuts it open and cuts a slice off for everyone to taste. I have never seen a nutmeg anywhere else than in a glass in the supermarket or as grinded powder. The taste is strong, slightly bitter but also refreshing in an unexpected way.

The garden walk continues for about half an hour. Every time we’ve walked a few meters Sinta stops and presents us to a new tree or bush; pepper, cinnamon, arabica coffee, curry leaves, ginger, turmeric, all-spice trees, rubber trees, cardamom. There were so many, that I don’t even remember them all.

The garden walk takes us back to the house but Sinta continues beyond it to show us the stables where they have 4 buffalos and three cows, several goats, chickens and a Turkey. The waste from the creatures are gathered in a 20 feet deep tank under ground, the methan gas from that tank is tapped off the top and used as fuel for the kitchen stove.

Behind the stables the garden walk continues to the pineapple field, on our way there we stop at figs, bananas, vanilla, a pond with fish and even more fruits and vegetables I don’t even know the names of.

Everything they serve for their guests originates from their own garden, spices, vegetables, fruits, buffalo milk and yoghurt. It strikes me as a Indian pendant to River Cottage.

Before dinner drinks are served in front of the dining room, most guest that inhabit the Dewalokam homestay show up to mingle and Sinta and her husbond José and their children Paul and Tara join us as well.