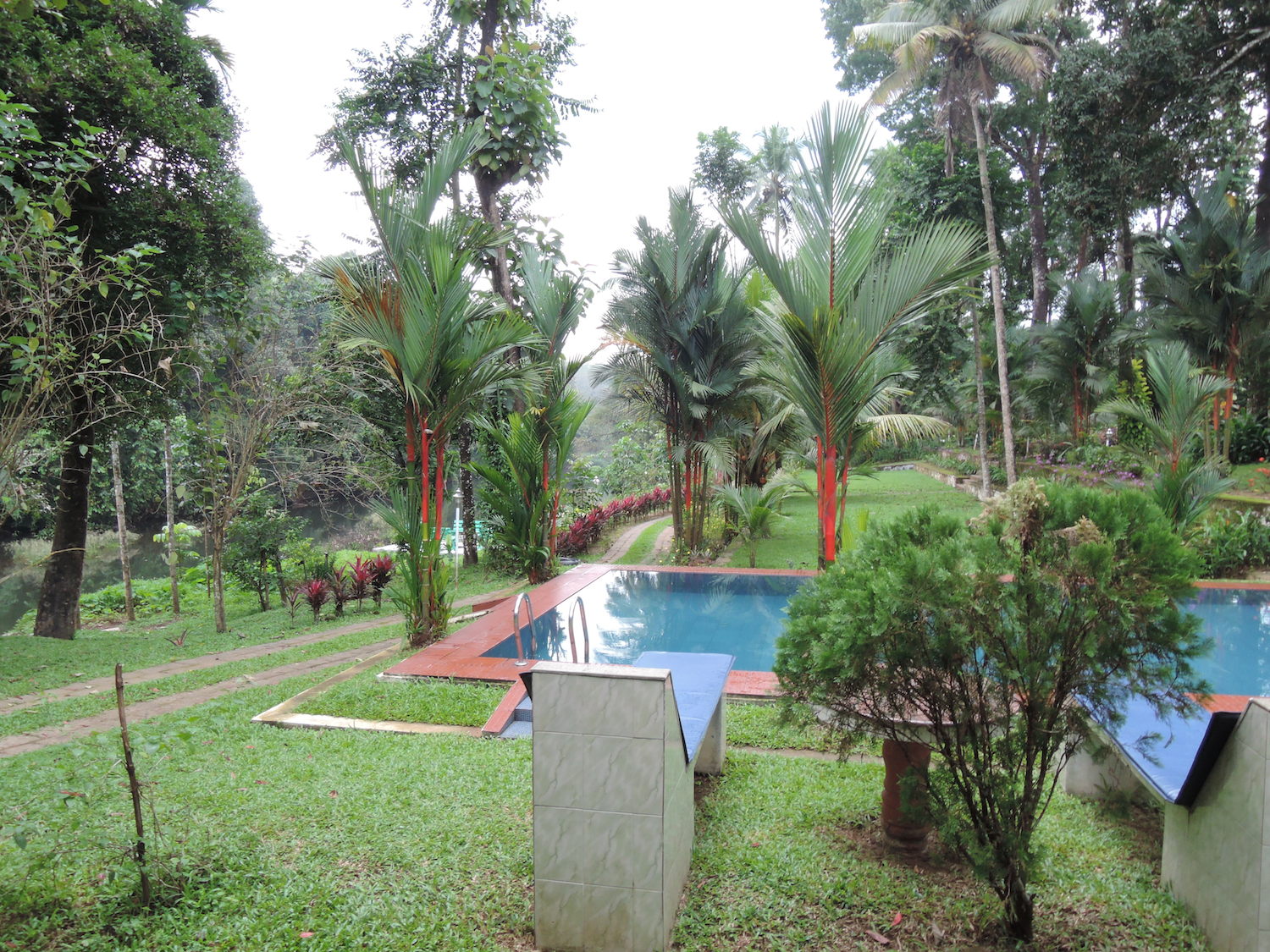 Paul the yogi, drives to Dewalokam on his motorbike. He does that every morning to start a yoga class at 7:30. When we arrive at the yoga pavilion Jose our host is there, preparing the area by rolling out the mattresses. In Dewalokam the morning starts with yoga. It’s travel day for most of the guests who were here when we arrived, so Marie and I are the only ones attending.

Jose tells us that tomorrow a new group of guest will arrive, it is a family from the northern part of Indian. “Normally we don’t accept reservations from Indians”. He explains that the problem is that Dewalokam is not a very luxury stay measured by Indian standards. “Indians want TV, internet and minibar in the room”. Jose evaluates that the attraction here is the nature and the garden and to most Indians that is not special.

Different people different standards; I see luxury all over the place.

Paul the yogi has arrived - and he takes us through half an hour of yoga exercises, the cobra, the real cobra, the elephant, the rabbit, the dog, the crocodile the easy cobra, the turning cobra. In between the exercises he tells us that the main purpose of yoga is to keep the spine flexible. We flex and we bend. “This exercise will keep you slim, young and beautiful” Paul explains as we’re halfway through the Elephant. After yoga he takes us through 25 minutes of chakra meditation.

It feels like I’ve been run over by a bus - but still it really feels good.

Sinta has arranged a school visit for some of the other guests who are retired teachers. We’re invited too. I sounds interesting to see an Indian catholic public school so we’re all in. It happens immediately after breakfast, so we have to rush off at a quater past nine, the car with the teachers and Richard who also joined us on the garden walk yesterday are already there, sitting in the principals office when we arrive.

The principal is a catholic priest, he greets us all at his office and asks us all where we’re from, he finds it very interesting that were Danish. “That is good and interesting, I like to train my students by having them listen to different accents”. I should have gotten suspicious by that remark, but I didn’t think anything of it at the time. 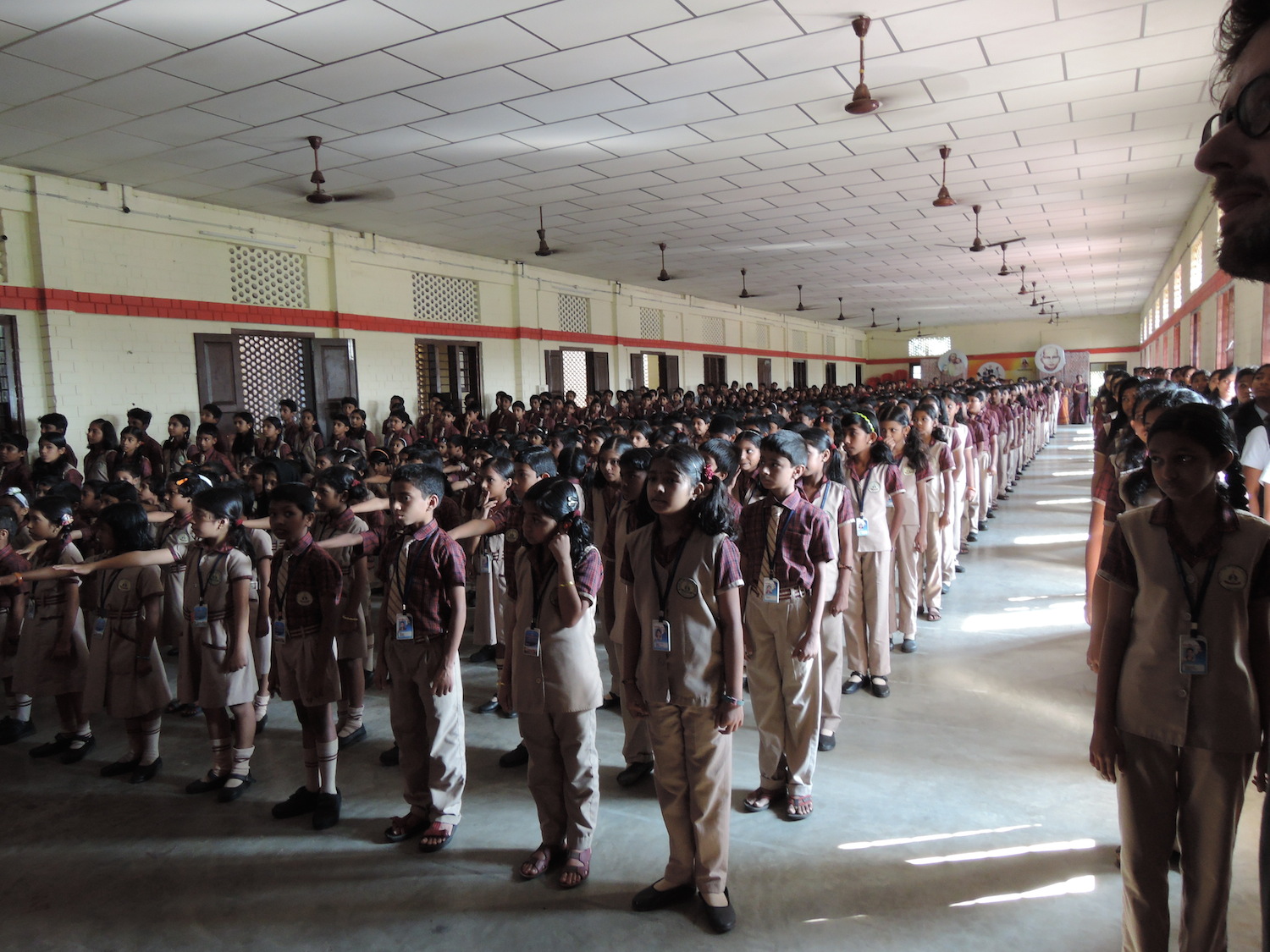 A few minutes later he looks at the computer on his desk and brings up a CTV footage that shows 5-600 pupils in a large room standing in straight lines like a parade. “OK it’s time to go” says the principal and leads the way to the hall where all the children are clapping their hands in marsh rhythm. We’re entering the room from behind and everyone is trying to catch a glimpse of us from the corner of their eyes without turning heads.

We’re all seated next to a large scene which the principal enterers directly and he introduces us to all the children. After their small program of swearing national loyalty, christmas carols and poetry reading the principal grabs the microphone again and invites us all up on stage.

I wasn’t prepared for that. On my way up to stage I recall the principals praising of my interesting Danish accent. I’m beginning to guess what’s going to happen; I’ll be giving an unprepared speak to 600 Indina school children, with the main purpose of exposing the fact that my English has a distinct Danish accent.

One of the retired teachers from U.K. grabs the microphone before me, she’s telling a short anecdote; On the cars down here she saw that they all have a sticker saying Kerala is gods own country. Her punchline is that she’s from Yorkshire in England and that is gods own country too, so Kerala is not gods only country, there are many gods own countries.

Personally, I would say that it’s not the hardest act to follow. In my book that wasn’t a smart remark given the context, so I guess coming after that I can probably say anything, without being the one that stands out - despite the fact that her English is far better then mine.

After the british correction that Kerala in India is gods only country the retired teacher stretches her arm with the microphone towards our family, someone has to grab it. It’s clear enough that I’m the one. After a short introduction of my family and our 5 million population compared to their 1.2 billion, I get the idea that they might as well get the full package, so I switch to Danish and say a few sentences in my native tongue.

We leave the stage and stand back on the side of it. I’m standing there bald headed with a pointed beard on my chin like a pale variant of Walther White in Breaking Bad. To my right is my son Niels who’s 15 years old 187 centimeters high and has blond hair and blue eyes. On my other side is my daughter who has blond read hair and freckles. Next in line is my wife who’s 176 centimeters with blond hair. She’s the tallest woman in the house.

It turns out that all 600 children is leaving the hall passing os two by two, as they walk pass us they are not just catching glimpses from the corner of their eyes anymore, they are all starring us right into our eyes smiling, some of them even cheering good morning and waving.

After the school visit José and Sinta has arranged for us to go to a waterfall higher up the Kaliyar river. It’s the two drivers from yesterdays ride that takes us there and follows us as guides on the trail about 2-3 kilometers up to the waterfall. It turns out that they are not at all dangerous when they aren’t behind the wheels. They are perfect guides for the nature walk.

Back at Dewalokam after lunch it’s time to just hang out. This is an organic farm, so there is obviously no chlorine in the swimming pool, just plain soft water. The pool lies in the garde in the shade of the Mahogany trees and overlooks the Kaliyar river. The river brink on the other side is a wilderness of tropical forest. I’m in the pool, but I feel like I’m in the middle of the Jungle.

The pool is emptied, scrubbed down and refilled every seven to ten days. It’s a lot of work, it takes Jose several hours during the night. The work that Sinta, Jose and their 20 person staff puts int his place is amazing.

After dinner, chairs are begin set out in a half circle in the court yard. A group of dancers will present old tribal dances and folklore singing. They dance and sing for about half an hour. At this point I’m exhausted. My internal clock is not adjusted yet. I need to go to bed.