After another morning session of yoga with Paul the yogi we’re invited to tour on the raft on the Kliyar river that runs through the farm. The raft is build of a welded iron frame that supports a number of empty barrels, it’s covered with a deck of weaved bamboo. On top of the deck are 4 plastic garden chairs bolted onto it. Somebody obviously spent quite some time on getting this construction right.

The gondolier is Jodi, a rubber tapper who has been part of the staff at Dewalokam farm since the beginning. He takes us down the river for a few hundred meters and then struggles to get us back again against the current. On the brink Richard and Patricia is waving at us. They are about to leave for their next stop, a few days in Moonar, which is famous for their tee plantations.

Jodi is soaked in sweat after his struggle but only ten minutes later his back again wearing fresh clothes, ready to guide us on a walk through the rubber plantations to the village Kaliyar, same name as the river. 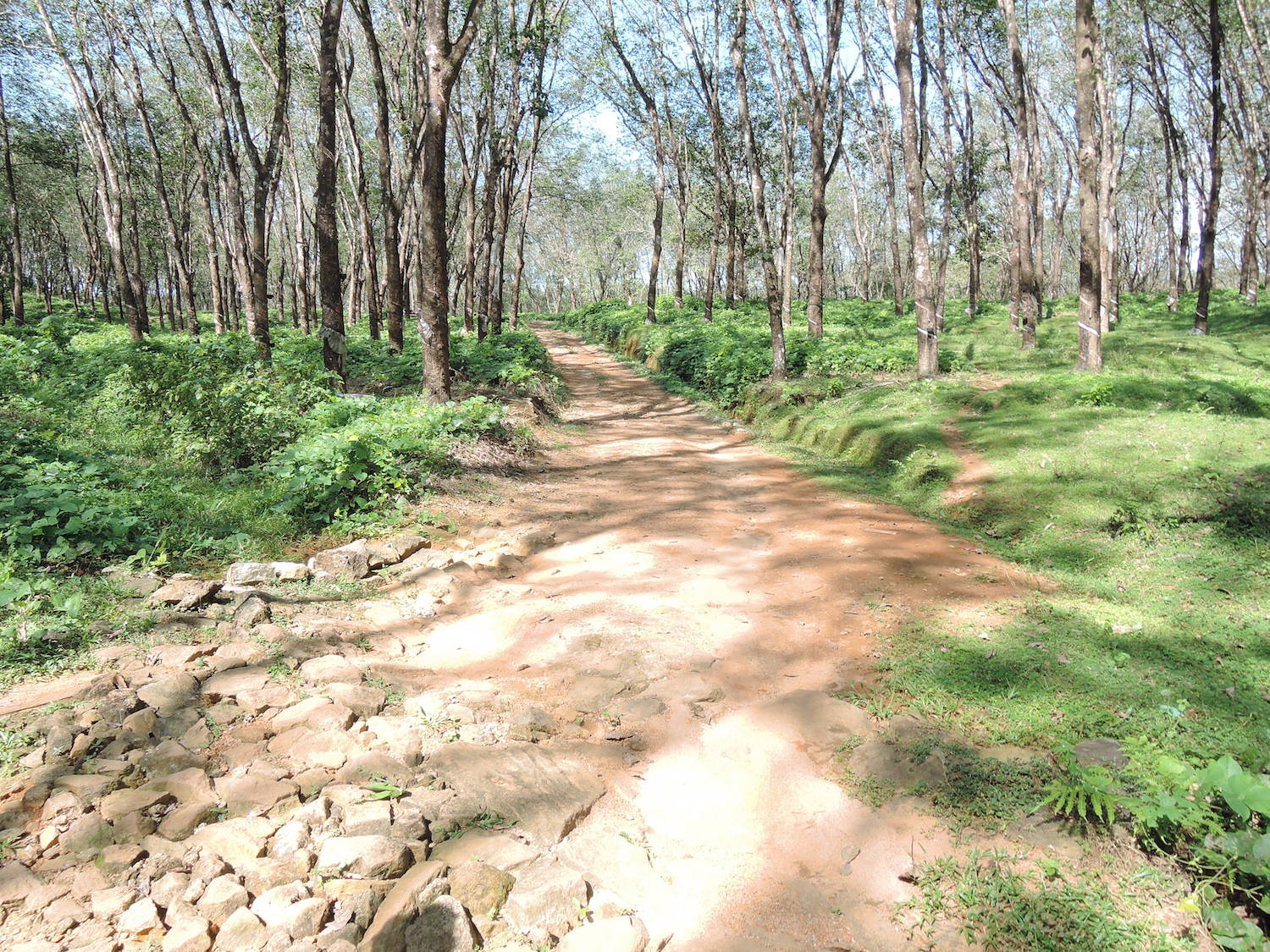 The walk is spectacular, the light falls gently through rubber the tree leaves which aren´t particularly dense but nevertheless give us a pleasant shade on the ground. The three crowns are high up so even though we’re in a plantations we have a clear sight quite far and we can see the hills in the landscape and the tappers emptying the small black bowls of latex tapped from the trees into their buckets.

As the plantation stops and we reach the road to the village we pass a small hospital. The building looks like it’s deteriorating slowly, there are weeds in the court yard, and at a first it looks abandoned, but Jodi explains that it’s actually open and operated daily by a doctor and two nurses. We walk in the roadside to the village. Being a pedestrian in the India traffic doesn’t make you feel more safe that going by car. We seem extremely exposed to the cars and tuk tuks racing each others in multiple layers.

In the village we’re waiting at the bus stop for the bus to take us back to a road crossing 3 kilometeres up, and there change to tuk tuks back to Dewalokam. The bus is probably from the early 50’ies. It hasn’t got any windows at all. The driver’s wheel is almost a meter in diameter. Don’t suspect he’s got power steering in his bus, but he drives it as if it was a go-cart.

Maybe the driver is just trying to impress us, there’s no doubt that we are pulling a lot attention to us. I bet he was thinking “Ahh tourists - I’ll give them the public roller coaster tour”. But then again; nobody else in the bus seem to be the slightest bit worried or clinging on to anything, so it just might be like any other bus ride in in Kerala. But bus driving doesn’t seem safe either,

At the road crossing we get off and change to three tug tugs. I’m in the last one together with Jodi. The driver is a fairly tall grey-haired man. In split seconds I manage to make the deduction: He’s grey-haired, which means that he’s experienced, he’s been driving tuk tuks for many years, and he’s still here - hence he’s a safe ride. The tuk tuk drivers have a tradition to decorate their vehicles and put slogans and statements on the wind shield. In the Village we saw one that said Infantjesus the one I’m in now with Jodi just says Speed. 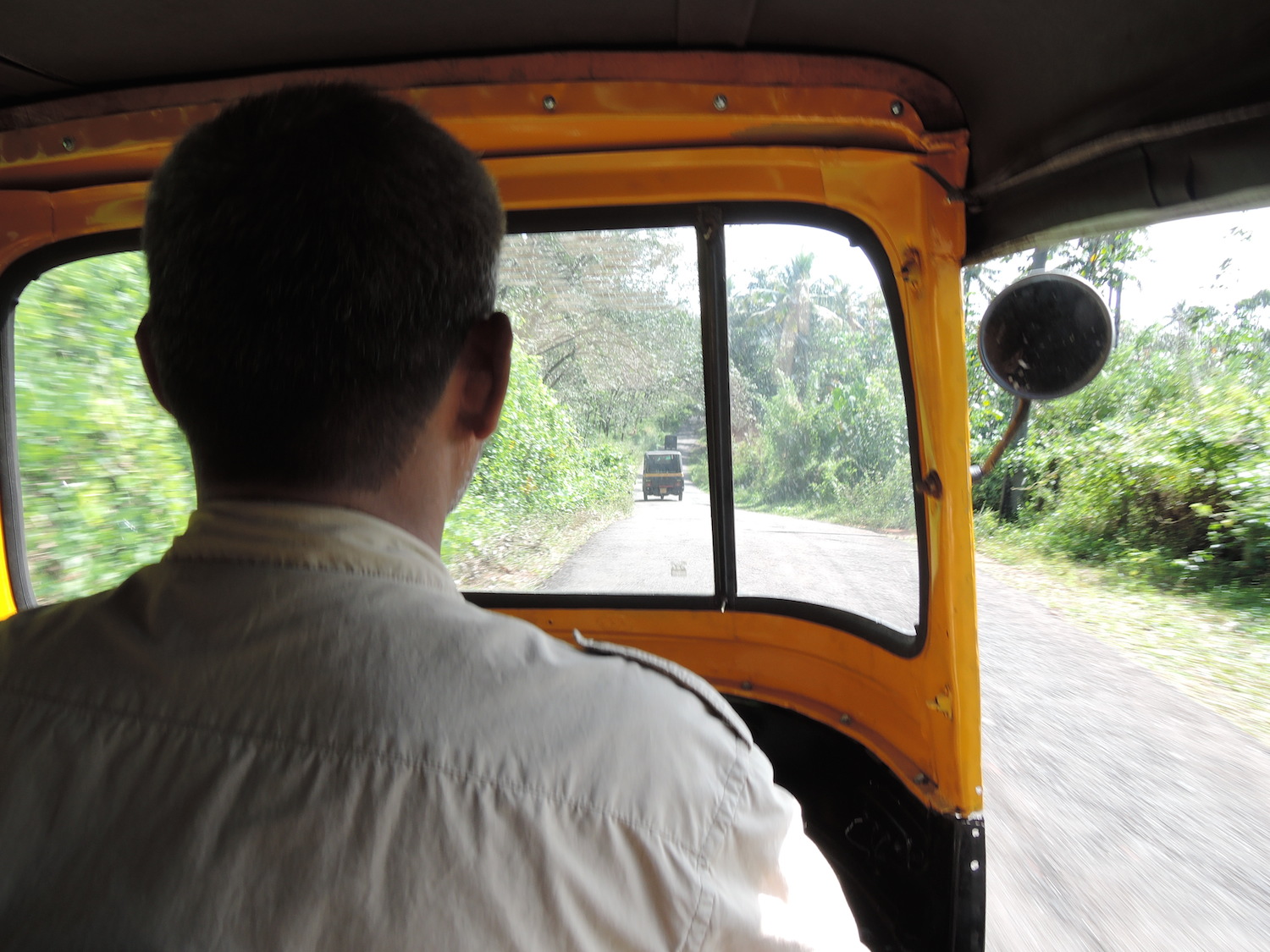 It turns out I’m not to worry. The clutch of the tuk tuk is completely busted. Every time the road goes uphill the tuk tuk slows down to walking pace and the engine is threatening to explode, at one of the steeper hills I see that even Jodi considers getting out and push, but maybe that would be an insult to the tuk tuk driver, at least he stays in his seat, and finally we manage to force the hill with all three of us staying inside.

It’s OK by me, this ride feels fairly safe.

Shop til you drop

At three o’clock Sinta is back form work to take us shopping. We all need some Indian style clothes to adapt to the climate here.

Sinta our hostess used to work as a teacher, but a few month back she changed her job and now she’s working in an office of the government’s educational department, overseeing that schools comply with educational plans etc. Apparently the new job has quite a steep learning curve, she told us that she’s using a lot of energy to learn the details of her new job. In her previous position as a teacher she used to get home from work and just leave it all behind and attend to the duties on the farm and her guests. But in her new position she’s still quite exhausted when she’s off work.

Jose her husbond and our host also has a full time job, he’s teaching English literature at the university in Thodupuzha. All though the 20 person staff is running Dewalokam during daytime both Jose and Sinta have their full attention on the guest while they are here and they personally arrange all the tours and executions for their guests.

This afternoon Sinta is taking us shopping in Thodupuzha. We feel quite privileged to have her company. She takes us to a textile and fashion store. Niels and I go together to find shirts and trousers, immediately we’re surrounded by three workers who are all ripping shirts off the shelves, unwrapping them and with great enthusiasm point firmly to the brands logos, fine shirt indeed. Many of them at a fourth of the retail price in Europe and still probably without reach of the majority of the population in India. I don’t think the rubber tappers shop here.

The dresses Sinta’s wears are all very beautiful, we all noticed that already. At the shop Sinta buys textiles and on our way back we make a quick stops at her tailor where she order new clothes. Turns out that her clothes are tailor made. It figures. 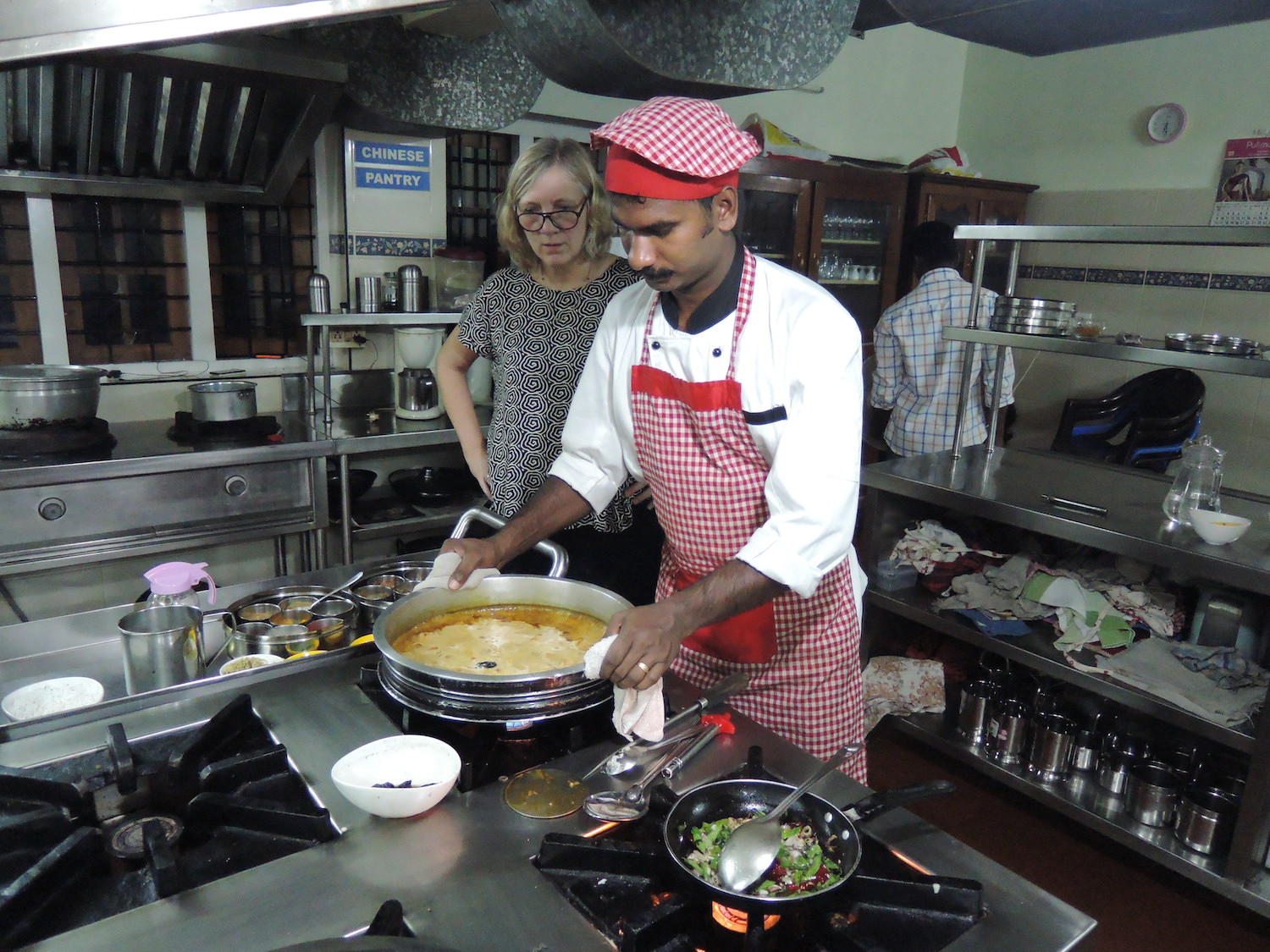 At six in the evening the chef starts cooking. As guests we’re invited to join and see how the spices are used. The chef is a young man he shows us how to make Kerala Fish Curry.

His stove is fueled by methan gast from the cows. It runs through a pipe from the top of a large underground container next to the stable and through the garden into the kitchen. He starts with mustard seeds, fenugreek in heated coconut oil then he adds ginger, garlic, onion then turmeric and chili the he adds water to turn it into a gravy and in goes the fish, when the fish is cooked he adds coconut paste which he just blended and that’s it.

It looks so easy.

Dewalokam made their own cookbook with the chef’s recipes. The chef hands us a copy of the cookbook so we can try ourselves when we get home. Expecting to learn that maybe it’s not as easy as it looks.

No regrets - for the past two years

Before dinner we all meet again for drinks in front of the dining room. I ask Sinta how old the farm is. Se tells that it’s a family farm on Jose’s side. They started 12 years ago, at that time Jose´s brother who is s a catholic priest in Germany would bring some of his colleagues with him to India and Jose and Sinta would accomodate them in the old guest house. That’s how the idea started and they began to expand.

8 years ago they took out a huge bank loan and build the new large two-story guest house that has 8 rooms, dining room, kitchen and massage rooms.

I ask her if she thinks that it was worth the trouble? If she and Jose ever regretted it? Her eyes tightens slightly then closes just for a second and her lips tightens, she takes a breath “not for the past two years we haven’t”. It turns out that the beginning was really rough, they had a season with only eleven guests - through the whole season. The day we arrived they had all 11 rooms full booked.

Jose went to Cochin to knock doors at all the travel agencies there, to make them book tours. Some of them responded “why have you build a resort in the middle of nowhere, no one wants to go there”. But it actually lies in perfect, almost even, distance between Cochin, Moonar and the backwaters at Alappuzha. All the guest we talked to while we stayed there, either came from - or was headed to - one of these three major tourist attractions in Kerala.

Sinta tells that one of the reasons why they couldn’t force themselves to sell was partly due to their attachment to the place but also to the fact that they are employing a staff of more then 20 people, and they pay them quite well for Indian standards, so Dewalokam doesn’t just support for 20 people, but more like 20 families. To some extend the village depends on Dewalokam to be a success.

Even when Kaliyar river during the monsoon two years ago raised to some 6-7 meters above normal level and both the dining room and the kitchen as well as their own home was flooded, they managed to get the diesel generator renovated - after also being completely under water - and only three weeks later they were ready to receive guests again.

Sinta tells that the past two years has been OK. The staff is intact, more an more guests find their way here and most of the bank loans are paid out, mainly by selling off some property. Staying here for five days makes me wish at all my heart that they will be able to make this homestay a success.

It just seems right by any measure.